Interfacing with the real world 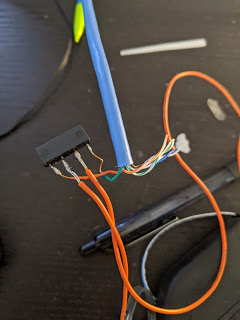 I moved to a new apartment building recently1, and have run into the problem of not having a dedicated package room to receive my Amazon packages.


The building is equipped with a call button system, but the buttons don't reliably signal the upstairs unit, and there's no guarantee somebody is at home to let the courier in. The Amazon courier typically attempts to call the phone number that's listed on the package to be let in, but not always. Sometimes they press the button. Mostly, all I get are notifications that look like this, which only get resolved after a bit of back-and-forth regarding "delivery instructions." 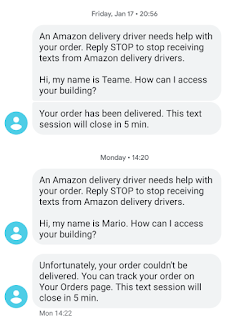 From the inside, the door control looks like this: 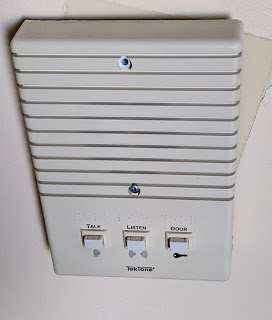 All I need is for some sort of system to automatically press the button that unlocks the door whenever somebody calls the number on the package. Easy enough, right? There are dozens of IoT robotic button pushers, all of which promise to do this sort of thing!

However, experience tells us that this glorious future is in fact entirely crappy. I had previously tried using a Switchmate to control my bedroom light. When pressing the physical button, it somehow only worked eight times out of ten. Even worse, when using the Wi-Fi feature, it worked less often; about six times out of ten. I hate the future so much. I was incredibly happy to dump that piece of junk on the "free table" at work so it could annoy somebody else instead.

So what's there to do? We can cobble our own unreliable IoT solution out of parts that we have lying around! The parts I ended up having lying around that ended up being useful are:

Past experience has indicated that relays are really the best way to go here instead of a transistor-based approach, which often ends up finicky and not pressing the button reliably enough. In fact, these reed relays were ordered "in anger" after incredible frustration with a prior project. Our old angry self comes to save the day for us!

Figuring out what to connect to what

Taking the door unit off the wall, we see: 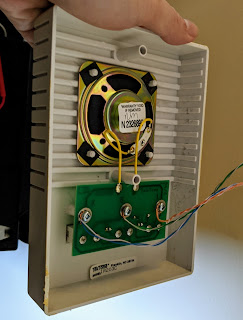 which makes it clear that the function of the door button is to short the orange wire to the green wire (apologies for the bad picture -- the traces are easier to see in person).

I ended up doing this in two phases. The door unit is wired to the apartment complex with just standard cat5 cable. I cut up another cat5 cable and screwed the appropriate wires into the same terminals, then used a RJ45 coupler and soldered onto the other end of a new cable. That way, (a) I wasn't restricted to soldering in the same room as the door unit, and (b) I could detach my Raspberry Pi entirely from the door unit as needed.

Here's a picture of that hacked up solder job: 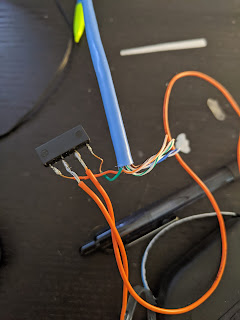 Note we are indeed shorting the green wire to the orange wire from the cat5 bundle. It doesn't help I used orange to connect the wires to the Raspberry Pi though. Here's everything shoved into a shoebox to protect from environmental damage. Super professional setup here. 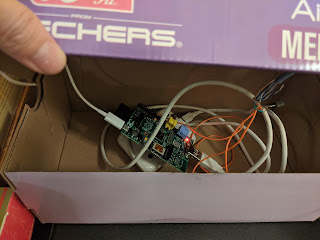 We can write this in Python because this whole thing is a dirty hack.

All we need to do is combine http.server with RPi.GPIO. To stop the whole Internet from being able to actuate our door lock, we only respond to one particular URL, which is a UUID that I generated. You might think this is "security by obscurity." I prefer to say that "we have an authentication system that is backed by a securely generated bearer token."

Every time we get a GET on our HTTP server that matches that UUID, we toggle a GPIO pin high, hold it there for a while, then toggle it back low. We can deal with the concurrency problem like we do with any other problem: by pretending it doesn't exist. Luckily, http.server only handles one request at a time, so it is written with our design goals in mind. If we get two requests, one can wait.

Here's a gist of that first version of the code.

Now that we have the Raspberry Pi capable of controlling the apartment lock, we need some way to be able to call it from any phone.

I used to use Tropo for all of my CPaaS (... which is apparently "Communications Platform as a Service"; I hate the future) needs because they offered free development accounts that let you experiment all you wanted as long as you were okay with no SLA. Unfortunately, they have since been acquihired by Cisco and their product is no more. It's a shame, because that API was pretty great -- you would get a no-nonsense REST call against your webserver whenever an incoming call came in, which is all we really wanted.

I tried out a couple demos, and Plivo offered me $10 of free credit so I thought that it'd be the best to just get started quickly. However, the console (a) kept bugging out on me and kicking me into creating a new incoming phone number, and (b) was super confusing about how to hook up all the parts together.

I think my original confusion is that all of the demo applications on Plivo are just a statically-hosted XML file, and I didn't think to change the endpoint to access my home web server instead. The fact that the workflow kept kicking me out to "Welcome to Plivo" because it was a demo account also did not help.

All roads in the console seemed to lead to hitting the "PHLO" button. This is apparently a flow chart-based version of "programming a phone system without knowing how to program," so I figured I'd try my hand at it. After struggling a bit, I managed to create this "program" (with secret tokens and phone numbers redacted): 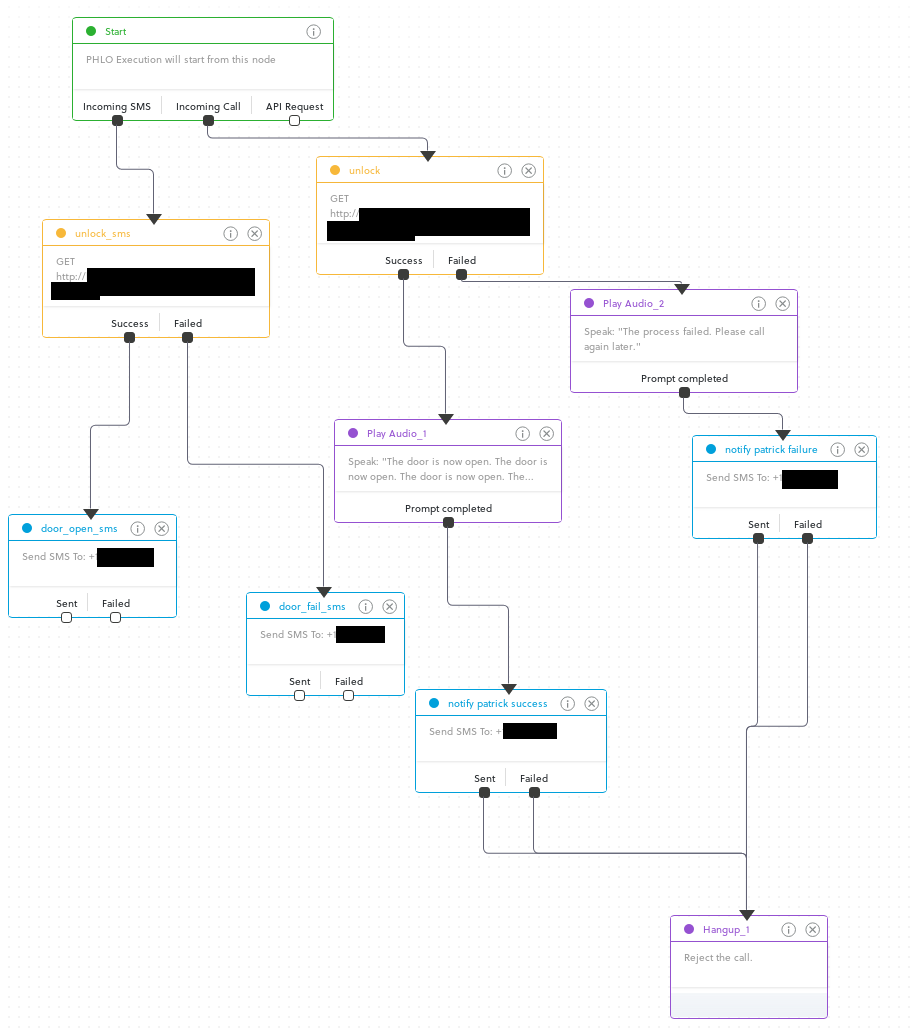 There's actually a bug in this program, but I can't seem to fix it. Bonus points if you figure out what it is! Oh well, it sort of works, which is good enough for me.

Our current system has the great property that we have Galvanic Isolation from the apartment's door mechanism itself. This is another reason why using a simple transistor to allow current to flow through the door button terminals doesn't work well; you'd end up coupling the two systems if they share a common ground. We'd like to maintain the isolation, as it's also not great to couple your own electronics with shared infrastructure for the apartment complex.

What we need to be able to do is observe current going through the relay2. One way to do this while maintaining galvanic isolation is to use one of my favorite devices, the optoisolator. The optoisolator is a combination of an LED and a phototransistor in the same package. If current flows on the LED side, it lights up, and allows current to flow through the transistor. If no current flows, there's no LED, and the phototransistor blocks a current path. I ordered a few PS2501-1 optoisolators from eBay for this purpose.

Here's the updated circuit diagram. We've added an NPN transistor (I grabbed a 2N2222, but the characteristics aren't super important; the important thing is that we're driving the relay with more voltage than the 3.3V before). The 200 ohms for the resistor is chosen to limit flow to less than 16 mA from the pin. 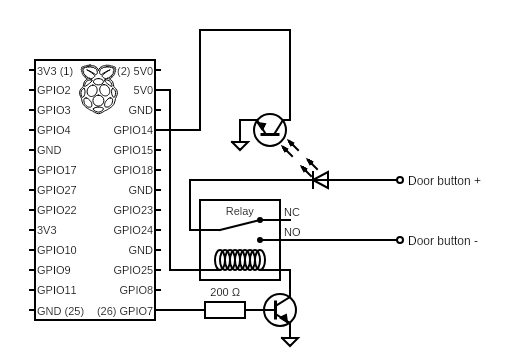 Note that the optoisolator is in one package, although it's drawn as a separate LED and phototransistor here. GPIO14 is configured with a pull-up resistor, which means that if current is flowing through the LED, reading from that pin should indicate a "low" value, whereas if current is not flowing through the LED, the phototransistor blocks current, which means that we would see a "high" value.

Deficiency (5) is easily dealt with third-party tools. Since I already have a Google Cloud account for other miscellaneous things, we can use Uptime Checks within that cloud project to configure notifications whenever the system is down. Uptime Checks are available for free; Stackdriver logging is billed, but there's an always-free threshold of 50 GiB.

Wrapping it all up: the new code, including verifying that the door is actuated before returning and the `healthz` endpoint, is available in this gist.

Note that the healthz endpoint doesn't actually verify that the relay can be successfully energized; however, failures at that point are logged and notified from the CPaaS layer.

Here's an image of the finished hardware setup. I've put the components on some prototype board instead of letting them dangle. 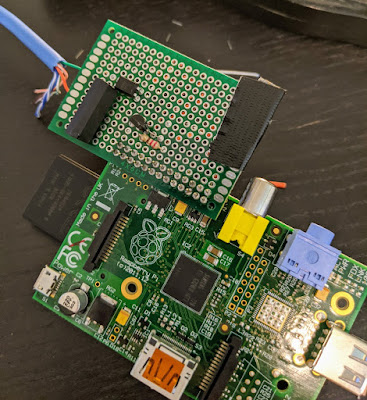 The good news is that the system works well for guests; whenever people need access to get to our apartment, we can have them let themselves in without having to use the finicky door buzzer.

1Yeah, this blog post, like all posts, is super late.
2Actually, it might be better to see whether or not there's voltage across the door button terminals. Unfortunately, experiments indicated that enough current to light the LED inside the optoisolator would also trigger the door mechanism, so we have this solution instead: we can only observe the circuit when we are actively changing it. It still solves the open-loop problem.
Posted by patrickxia at 6:53 PM